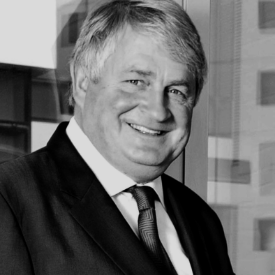 Throughout the development and growth of Digicel, Mr O’Brien has focused on bringing modern communications technology to underserved and remote communities around the world. His guidance has helped Digicel become a leader in opening previously closed or stagnant markets, ultimately driving down prices and delivering valuable services to consumers. As chairman, he continues to push for new ways that Digicel can help customers around the world with unique, competitive telecom technology.

Denis O’Brien got his start in telecommunications with the Esat Telecom Group, which he founded in 1991, serving as the company’s Chairman and CEO. Initially formed to compete against Eircom, Ireland’s state-owned telephone company at the time, Esat raised $1 billion in equity and bonds over a five-year period, and was listed publicly on the NASDAQ (US), EASDAQ (Amsterdam) and ISEQ (Dublin) stock exchanges.

Given this early success, Mr O’Brien helped establish Esat as the number two telecommunications company in Ireland, offering a full range of residential and corporate services. In 1998, Ernst & Young awarded Denis Ireland’s Entrepreneur of the Year in recognition of his entrepreneurial endeavors. In 2000, he sold Esat Telecom to the British Telecom Group, which gave him funds to start on his next project: Digicel.

Mr O’Brien is also founded a media group based in Dublin with radio networks and digital media outlets throughout Ireland, the UK, and Continental Europe. Communicorp is home to some of Europe’s most popular radio stations, including 98FM in Dublin and the Heart and Smooth Radio networks in the UK. In 2021, Communicorp was acquired by Bauer Media Group for over €100 million.

Throughout his career, Mr O’Brien has helped launch or expand a number of other businesses in the energy, transportation, and hospitality markets, including: Quinta do Lago Resort in Portugal; Actavo, an Irish network infrastructure support company; the Topaz Energy Group; and Aergo Capital, an aircraft leasing firm. In 2019, the Irish-U.S. Council recognized Mr O’Brien for his work with the 2019 Award For Outstanding Achievement.

Denis O’Brien exhibits the true spirit of philanthrocapitalism—helping people improve their lives through the use of open, liberal marketplaces. In addition to providing emerging markets with access to reliable, inexpensive telecommunications technology, Denis actively participates in philanthropic giving and supports charitable causes across all of the areas that Digicel operates.

Some of the projects Mr. O'Brien has supported through the Digicel Foundation include:

- More than 170 schools built in Haiti after devastating natural disasters

- 86.5% literacy achieved in Jamaica through partnerships with USAID and the Jamaican Ministry of Education

In addition to his patronage of the Digicel Foundation, Mr O’Brien started the Iris O’Brien Foundation—named in honour of his mother—in 2000. The focus of the Foundation is to help disadvantaged communities around the world. The Foundation has spent more than US$66 million to aid charitable projects and organisations in Europe, Africa, the Middle East and Southeast Asia.

Mr O’Brien was elected Chairman of the Clinton Global Initiative’s Haiti Action Network, which addresses the damages caused by hurricanes and the 2010 earthquake. Mr O’Brien has driven donor commitments to country-wide reconstruction efforts and has received recognition for his work in aiding Haiti recover from the aftermath of natural disasters. Mr O’Brien received the Clinton Global Citizen Award, the National Order of Honour and Merit and the title of Goodwill Ambassador.

Mr O’Brien’s commitment to education is also evident through his contributions to institutions of higher learning. The O’Brien Centre of Science at University College Dublin (his alma mater) was dedicated to him. At Boston College Carroll School of Management, where he received his Masters of Business Administration degree, he endowed the Denis O’Brien BC MBA’82 Fellowship. He has also contributed to buildings and programmes at Trinity College Dublin and Dublin City University.

● He is a board member of Concern Worldwide, a humanitarian aid agency that offers assistance related to emergency response, health and nutrition, and education, among other things.

● He serves as the Chairman of the Council of Patrons of the Special Olympics , and he chaired the 2003 World Summer Games in Ireland—the most successful games to date.

● He also serves as a United Nations Broadband Commissioner for Sustainable Development , due to his experience as a telecom entrepreneur.

● Honorary Doctor of Laws, University of the West Indies

● National Order of Honour and Merit, Republic of Haiti