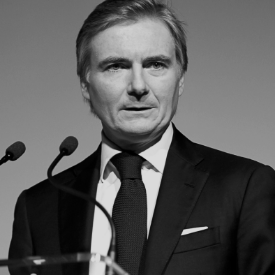 Jean-Yves Charlier was appointed to the Digicel Group Board of Directors in September 2018 and became Executive Vice Chairman in December 2018. In January 2019, he stepped in to fill the role of Group Chief Executive Officer for Digicel Group, serving until August 2020, before returning to the board as a Non-Executive Director. Under his tenure, he returned Digicel to growth, setting it on a trajectory for future success, and guided the company through the Covid-19 pandemic. Jean-Yves served as the Chief Executive Officer of VEON from 2015 to 2018 and led the transformation of the US$10billion telecoms group serving 240 million customers across the world.

He was also Chairman and Chief Executive of SFR, the second largest telecoms operator in France, where he led the repositioning of the business in one of the most competitive telecom markets in Europe. Leading up to his role at SFR, Jean-Yves was Chief Executive at Promethean and COLT and held senior roles with British Telecom, Equant and Wang. He has served on numerous boards over the years and was the recipient of numerous industry awards including the TMT Finance award for CEO of the year in Europe (2016) and the BVCA Private Equity Backed award for CEO of the Year in the UK (2009).

He attended the American College in Paris and The Wharton School at University of Pennsylvania.